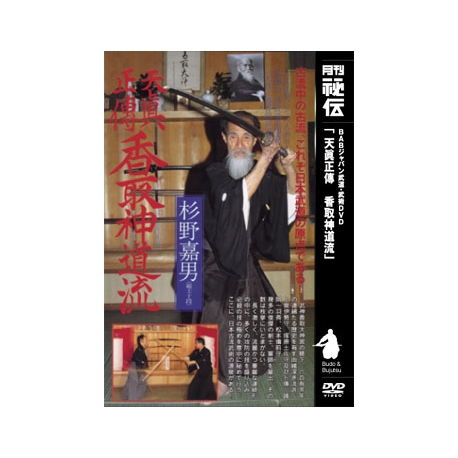 SUGINO Yoshio was 10th dan and had the title of Hanshi. He was a student of Kunisaburo IIZUKA for Judo, Saneatsu MATSUBUSA for kendo. Jigoro Kano  (1860-1938) gave an order Ichizo SHIINA and Morihei Ueshiba (1883 - 1969) to teach Katori shito-ryu and Aikido to SUGINO. He published a book "Teaching of Tenshin Shiden Katori Shinto-ryu martial art" in 1941. International Martial Arts Federation conferred the 10th dan on him in 1982.  He advised sword technique in Kurosawa's film such as Seven Samurai, Yojinbo (Bodyguard).

SUGINO Yoshio was 10th dan and had the title of Hanshi. He was a student of Kunisaburo IIZUKA in Judo and Saneatsu MATSUBUSA in kendo. By order of Jigoro Kano (1860 - 1938), Saneatsu MATSUBUSA and Morihei Ueshiba (1883 - 1969) taught judo and Aikido to SUGINO. He published a book, "Teaching the Martial Art of Tenshin Shiden Katori Shinto-ryu" in 1941. The Federation of International Martial Arts awarded the 10th dan to Master SUGINO in 1982. He was a consultant in KUROSAWA's movies such as The Seven Samurai and The Bodyguard, giving advices for saber techniques.

Katori shinto ryu was created by Ienao IIZASA (1387 - 1488) during the Muromachi period. He is the one who established the concept of Kata and systematized it because at that time, the Japanese martial arts didn't have any.

Katori Shinto-Ryu is the oldest and also the best kobudo school. This school developed not only kenjutsu but also jujutsu, iaijutsu, bojutsu, architecture, astronomy and geography; it is a very comprehensive school.

The contents of this DVD