This time, we have decided to make the deal with Osawa Shokai, as our new manufacturer and supplier of Iaido sword.Osawa Shokai still does not have any sales overseas; therefore, Sinonome is the only overseas distributors of Osawa Shokai. Osawa Shokai is a small workshop that was two people; however, Osawa Shokai is particular about the manufacture of Iaito unlike large companies. Prior to the deal of purchase, we went to Seki, Gifu-prefecture in mid-October. Because we have wanted to talk directly to Mr. Osawa, the president of Osawa Shokai and to see his products with our eyes before we have deal with this company.

Osawa's workshop is really a small workshop. In this workshop, there are many materials piled up such as blades, tsukas, and so on, and these were too many to walk inside the workshop.  Mr. Osawa's family is very famous big company in Seki, which sells from art sword, Iaido sword to kitchen knives. Mr. Osawa was born as the second son of the family. In Japan, because the eldest son will join the family business, Mr. Osawa had a different profession after having graduated from school. He was away a temporary from Gifu. After a while, his father fell sick, and he went back to Gifu for his father and their family business. Then, he started the family business helping his family and his brother. He learned all processes to make a mock sword (iaito) to become afull-fledgedcraftsman.

He learned not only the skills to manufacture iaito but also the process and the style of the business such as producing the products as quickly as possible and selling them as cheap as possible to profit rise as much as possible. However, Mr. Osawa started to question the way of management, especially that of production. In general, a large company does not process very detailed operations in order to save the time. He realized that he had a very different point of view of management and production from his elder brother.

His elder brother succeeded the family business. However, Mr. Osawa was always particular about the manufacture of Iaito. Therefore, he established his own company to product mock swords. 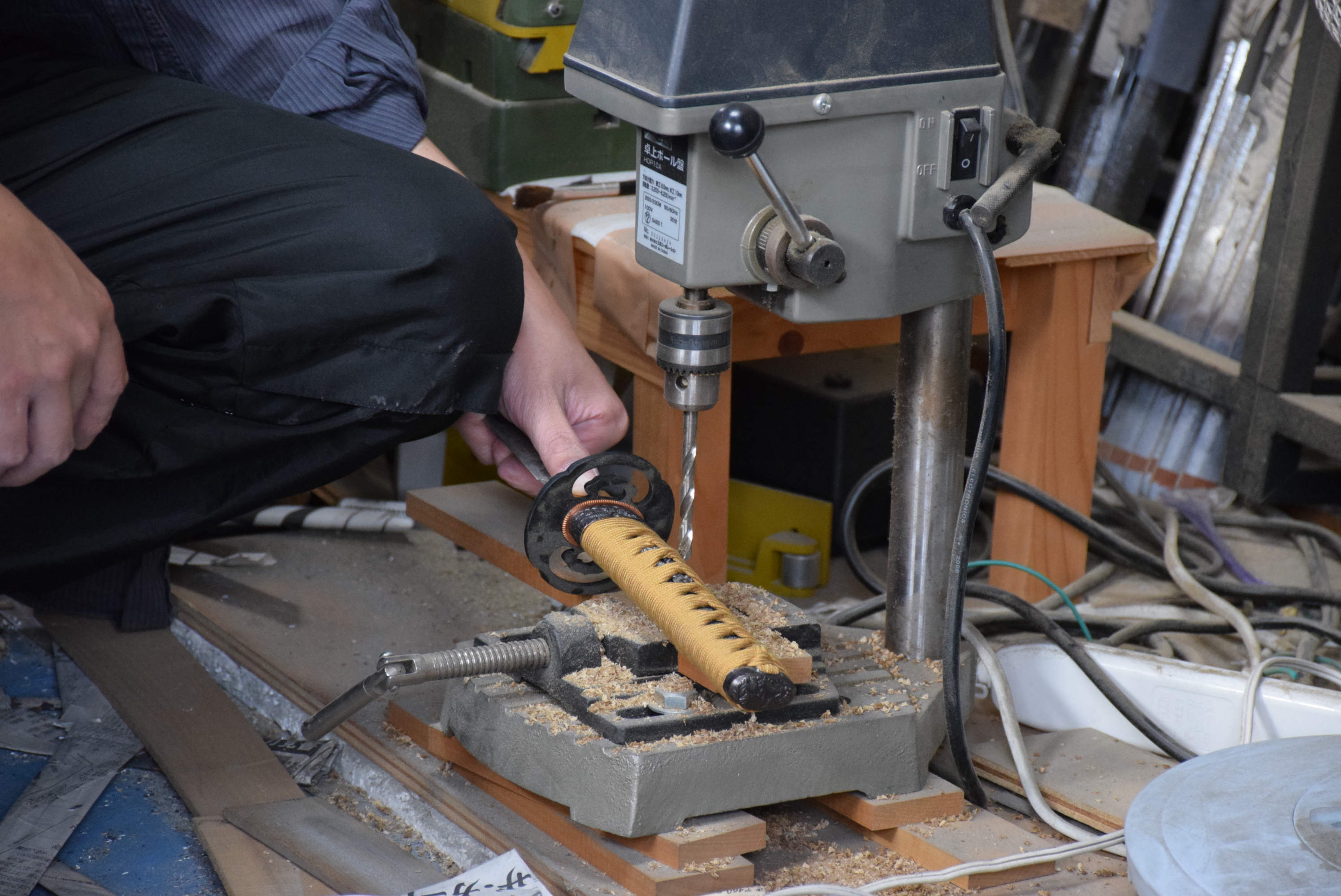 In order to understand his passion to manufacturing Iaito, we interviewed Mr. Osawa below;

- In the case of process of manufacturing iaito, can you do all processes in this workshop?

It depends on goods. We do not produce some products here and outsource them.

- When we look at the Japanese manufacturer's catalogs, it comes with a variety of names such as super alloy, strengthened alloy and an alloy. What is the difference?

(Laughs) there are two production methods to produce the blade of the simulated sword; one is die casting (metal die casting) and the other is sand casting. In the case of die-cast, the liquid material is injected in the mold and is heated. It is possible at low cost in large quantities production. But, when it is heated in the metal mold, it keeps air inside of the metal. So, air bubbles left inside the blade and this blade will be less solid because of the air bubble in the blade.

Sand mold casting is a method of making Buddha and the big bells of temples as quenching the alloy in sand mold. Because it is the sand, air can be released. The bubbles are not kept in the blade, and because the sand mold can heat at a high temperature, so its durability and solidness are higher than metal die-casting. However, when you remove the contents, a sword, the sand mold is broken. Sand mold can be used only once. In addition, because the heating time is longer compared to die-cast, it makes the sword more expensive. This process is lower productivity than that of the metal die casting.

Even in Japan, there are a few companies to manufacture Iaito and there is only one company using Sand mold casting. The form of sand mold is the same. But each company has different names of swords to differentiate his own sword from others and each company thinks his own sword is better than others. (Laughs)

The important thing is how manufacture the sword. The quality of the sword will change by the time and method to be applied to produce. The more you take your time to produce a sword, the higher is its quality. The basic, the sword after casting, is the same, but the finishing and the process make the sword’s quality different. I do always minutest care to manufacture a sword. So, it takes time with a great care in all details.

It is usually from one month and a half to two months. Because I work one sword at a time very carefully, I do not want to work in a hurry. Even the delivery time is long; I would like to be bought by those who want good quality swords.

-Hawatari (the length of the blade), how long can you manufacture it?

- Is it better to put 2 pegs (mekugi) rather than one?

I can put two pegs for the clients who absolutely like to put them in their swords. However, even though there is a peg or 2 pegs at Tsuka (handle), it does not change so much.   We put only one peg, vertically straight one and we never have problem with this way of manufacturing.

- In the case of Scabbard, is it possible to make only the scabbard for the exchange?

- Is it possible to make only the scabbard for exchange with the other company’s scabbard?
Yes, it’s possible, too.

- At TOKUZO, they said they could not make a scabbard for exchange with other’s company.

(Laughs) Because it is not their product, they do not like to care, I think.
But, as I said before, the sword is made of sand casting, which is the same manufacturing everywhere, so it should work.

- Do you work all tasks here, in this workshop?

Yes, we do all here.

- Is it possible to change the sword’s curve?

Yes, we can change the curve by forth from the standard shape, so we do not recommend doing that.

- What is the difference between the wart shark skin (oya-tsubu) and the normal one?

Because Oya-tsubu is a big grain and there is only one place for one shark, it is precious and expensive, and it looks luxurious.

- Do you have a light blade and a heavy blade?

Yes, our clientshaveeachpreferenceand they are also physically different. The thin blade is about750gwithout scabbard, and the heavy weightbladeisabout900g.
Otherwise, we make up to 2 feet 9 in for tall people. For some customers who like to have their own original swords, we propose several options to personalize their swords from the standard ones such as scabbard cap (kojiri), coating of the scabbard and so on.

- Do you also do scabbard coating process here?

- Do you really do this coating by yourself?

Yes, I do coloring and menuki customizing, scabbard coating by myself here in my workshop.

- Do you really do all processes by yourself?

Not all, sometimes I outsource some processes. But in general, I do almost all things.

By the way, this finger…. (Mr. Osawa shows us his fingers), it was my fault because my skills were good enough at the apprenticeship period. (As saying he shows his fingers which are only half at index finger and ring finger!) I do not have such an injury anymore today.

- By the way, men are interested in swords, what do you think?

(Laughs) Is that so? Well, I do not know. In my case, since my child hood, I grew up surrounded by the sword. My friends ask me; it’s good to make Japanese swords but can you sell them nowadays?

- Do you sell your products overseas?

Currently, we do not sell them directly to any foreign countries. We sell our swords only for the Japanese who live in a foreign country or a foreigner who can speak and understand Japanese very well.

When Mr. Osawa showed his fingers, we were really shocked but Mr. Osawa, age of around forties, is a quiet person like a typical Japanese craftsman. He is a handsome with very lovely smile (we liked to take his picture but unfortunately he did not let us take his picture…). When we asked some questions about swords, he explained many things.

In the past, we met many Japanese craftsmen and they are often stubborn. But in the case of Mr. Osawa, when we asked many questions, he answered our questions understandably as he showed us the materials that he kindly looked for in many piles.

In Sinonome, we like to establish our relationship with suppliers which are not a mass production, but the craftsmen with a good quality. We like to introduce original products that cannot be proposed by others.

As we talk to craftsmen, we can find out new aspects. We hope that eventually we can create new projects to our customers.

Mr. Osawa has a small company (only 2 people), but we felt his great passion for their works.

The delivery time is from 1 and a half month to 2 months. That is long, but we do not scarify its quality. We appreciate craftsmen like Mr. Osawa rather than an industrial company because the quality is very important for us. 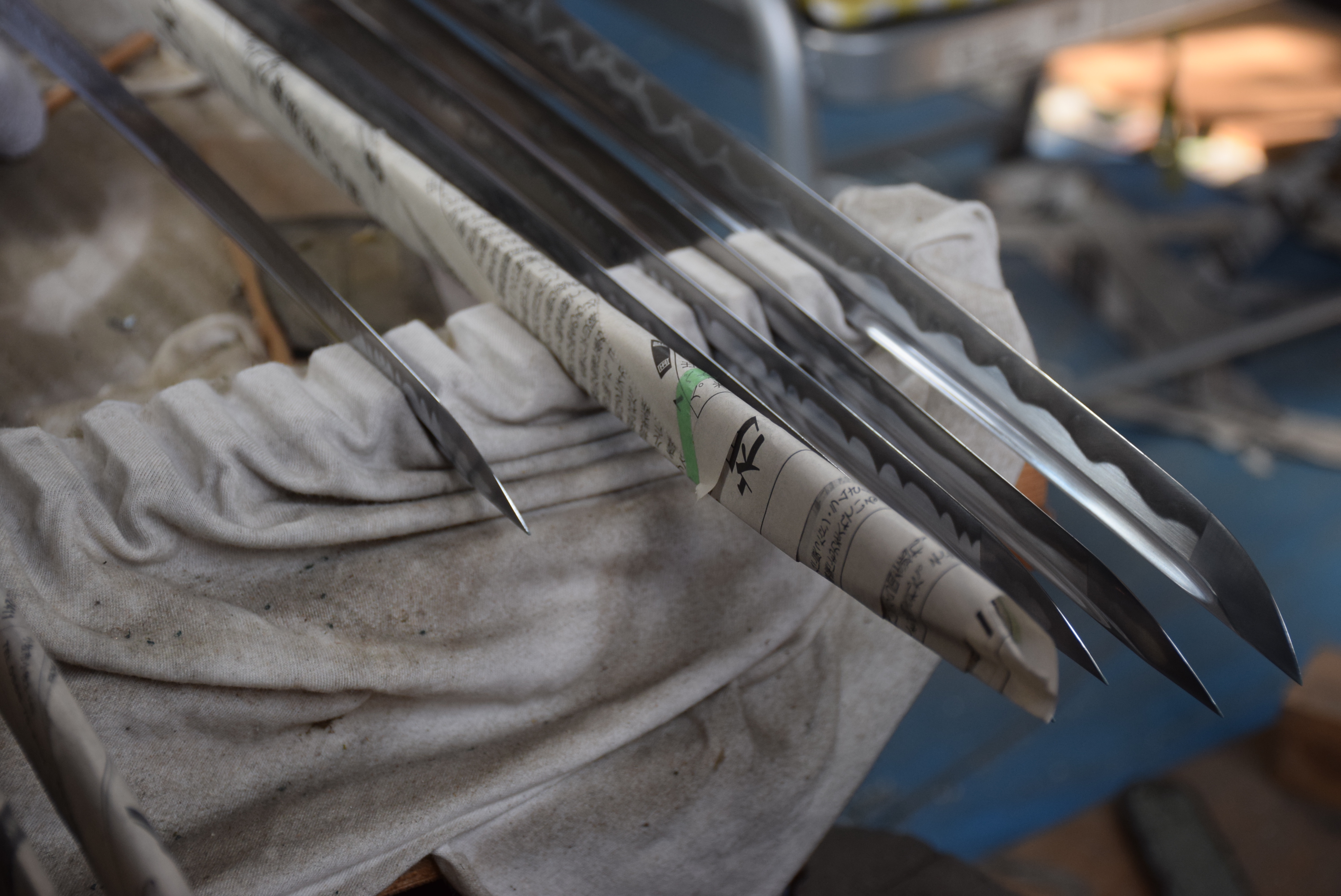 Iaido sword page is here.
Because of the limit of software technology of our site, you cannot select all options in one page. Please, go to another page for all options.
After you order options, we will contact to you as confirmation later.